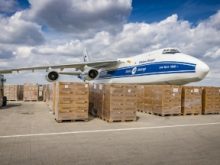 The volume of freight handled at Leipzig/Halle Airport (LEJ) reached the figure of 1,025,187 tonnes and already exceeded the 1 million mark in the month of August since the beginning of the year. This represents an increase in the amount of cargo of 18.4 percent compared to the same period in the previous year.
Approximately 125,050 tonnes were processed at the airport in August alone this year. That represents an increase of 15.1 percent in comparison with the same month in the previous year.
The total amount of freight handled in the previous year set a new record at more than 1.38 million tonnes. The number of air cargo flights rose by 25.8 percent to more than 40,000 during the first eight months of the year.
Leipzig/Halle Airport is one of the cargo airports with the dynamic growth rates in the world. LEJ is the first airport in Germany to have registered more flights in August than before the Covid-19 crisis (August 2019).