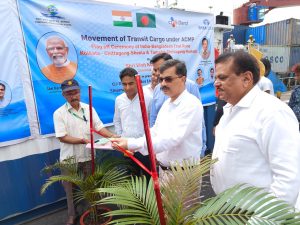 As part of the trial runs for transhipment of cargo to the North-eastern states using Chattogram and Mongla ports to boost connectivity between the two sides, CJ Darcl Logistics Ltd., flagged off cargo ships to the region. Cargo ships are scheduled to follow Kolkata-Chattogram-Sheola and Tamabil-Chattogram-Kolkata routes as part of the trial run. This is part of a bilateral agreement signed in October 2018 for the transit of goods from India via Chattogram and Mongla ports in Bangladesh (ACMP). The cargo, Steel TMT bars, for the container ships are for Tata Steel Ltd. The trial run may lead the way for regular movement of cargo via Bangladesh ports to Indian North-east region, which will help to lower transportation costs and develop infrastructure in the port region, including creation of direct and indirect employment. The vessel may return to Chattogram Port within three days of its departure. Post unloading, the goods will be sent to Assam by road through the Sheola Land Port in Sylhet. 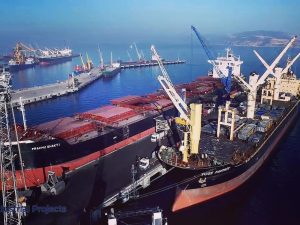 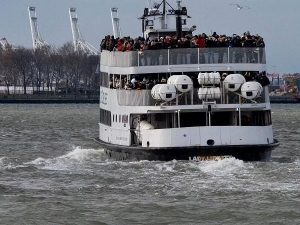 Under the Sagarmala scheme, the government is planning to launch a ferry service between Karaikal Port and Kankesanthurai Port in Sri Lanka this year, Puducherry Chief Minister N. Rangasamy told the Assembly on August 22.  Presenting the Budget of Rs 10,696.61 crore for 2022-23, Rangasamy also said that under the Sagarmala scheme, it was proposed to commence commercial cargo handling operation in Puducherry Port in association with Chennai Port Trust this year. “It is proposed to invite EoI from firms for operating passenger and cargo ship and promoting other allied activities in Puducherry Port,” he said. 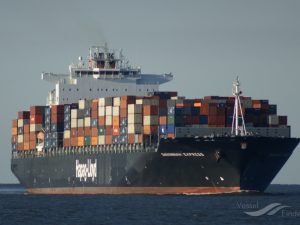 MSC India transported heaviest ever breakbulk parcel moved by container ship from India, surpassing MSC’s previous record. It loaded 140-ton transformer on MSC Regina from the port of Mundra, India recently. The transformer is destined for a greenfield power transmission development project in Zambia. MSC’s previous heavy-lift record was for the loading of a 115-ton transformer in 2018 at Port of Nhava Sheva. India is catching up with countries such as China, Germany, South Korea, and the USA, where pieces of more than 200 tons have already been loaded successfully on container vessels. Lifting gears were used to make this a successful loading using the right combination of special equipment. Putting onboard a 140-ton parcel is a substantial process and requires immense focus and precision. “We extend a special note of thanks to members of the team at Adani Mundra Terminal who extended their cooperation as always. This entire operation was completed in the allotted berthing window, enabling us to maintain the vessel’s service schedule. The success of this operation has opened new doors for MSC to also cater to the heavy cargo category on container ships,” cited a press release. 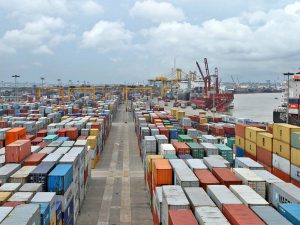 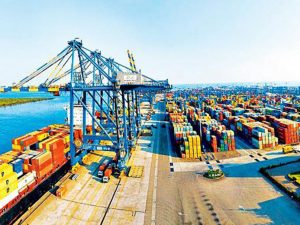 Kandla Port (Deen Dayal Port Authority) in Gujarat is the first port in India to have 5G Telecom facilities as part of the central government’s efforts to beef up infrastructure in the state. Major ports of the country have been linked the dedicated freight corridor so that goods could reach the North Indian hinterland within hours. The project will help the port to fulfill its vision of becoming an efficient mega port by experimenting on new automation processes on 5G networks to improve cargo handling. The Kandla port has thus become the only port (minor, major or private) to be 5G ready before the planned launch of 5G network in the country. To process the infrastructure the department of telecom (DoT) officials visited the Gujarat port along with officials of telecom service providers and infra providers i.e. Indus Towers, Vodafone, Jio, Airtel and BSNL on April.

‘India may trade with Central Asia through Chabahar Port’ 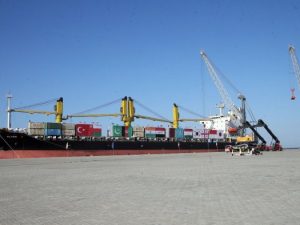 Sarbananda Sonowal, the Union Minister of Ports, Shipping & Waterways (MoPSW) and Ayush, reaffirmed India’s commitment to utilising Iran’s Chabahar Port to maximise maritime logistical opportunities with the Central Asian region. The multi-modal logistical corridor is the International North-South Transport Corridor (INSTC), will be connected via the bustling Shahid Beheshti Port at Chabahar in Iran. This will reduce the government’s maritime logistical expenses, which will increase trade between the two regions. The minister was speaking on Chabahar Day. He said the government was engaging with high-level diplomatic group from Central Asian nations in Mumbai in this connection. 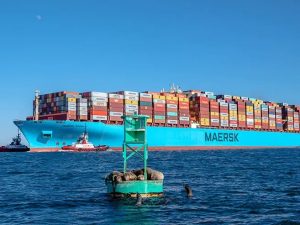 AP Moller- Maersk has successfully completed the first India-Bangladesh cross-border logistics of containerised cargo using the inland waterways of the Indo-Bangladesh Protocol Route for Coca-Cola Bangladesh Beverages. By transporting 50 containers (TEUs or Twenty Feet Equivalent Units) from Kolkata in India to a river port near Dhaka in Bangladesh on a barge on the National Waterways 1 on the India side, said an official statement. “The Indo-Bangladesh Protocol Route has created great trade opportunities for the two countries over the last decades. By advancing into containerised transport on this route, we are expanding  the opportunities for importers and exporters from the two countries with a faster, more reliable and safer option for their cargo,” said Vikash Agarwal, MD, Maersk South Asia. Soumyendu Sen Sarma, Director – Finance, Coca-Cola Bangladesh Beverages, also said, “The maiden barge voyage has been successfully executed where there has been a significant reduction of transit time. The delivery schedule of the cargo, which used to be routed through the transhipment hub and then arrive in Chittagong and further to the  destination, used to be impacted severely with delays. The speed of delivery with the new solution offered by Maersk over inland waterways is going to be extremely beneficial for us.”

Andhra Pradesh Chief Minister YS Jagan Mohan Reddy on Wednesday laid the foundation stone for the Ramayapatnam Port in Nellore district, marking the beginning of construction work at Rs 3,736.14 crore. He said there are only six ports in the state since Independence and the ruling government is bringing four more ports, including Ramayapatnam, to boost economic activity, job opportunities, and overall development in the state. The Chief Minister added Ramayapatnam Port is being taken up at an investment of Rs 3,740 crore for four berths with a handling capacity of 25 MT, where six more berths can be added in the future at a cost of Rs 200 crore for each for handling 50 MT. With the construction of four ports, 100 MT of cargo handling can be added to the existing capacity of 228 MT, he added. 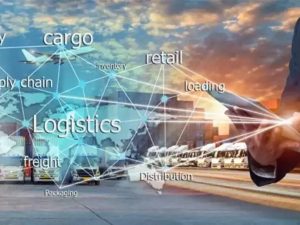 Shiprocket has recently announced acquisition of Arvind’s omnichannel technology business, Omuni. The transaction will be carried out as a combination of stock and cash for total consideration of Rs 200 crores. Combination of both entities will facilitate quick, efficient deliveries of shipments from the nearest store or warehouse thus reducing delivery timelines and enhancing customer experience. Focusing on leveraging cutting-edge technology to build data-driven solutions and integrated product offerings, the Shiprocket and Omuni deal is expected to ensure better inventory utilization, faster-localized fulfillment, optimize operational costs, and deliver delightful multichannel experiences. With seamless inventory synchronisation between online and offline channels, order volumes and order fulfilment rates will increase for retailers.