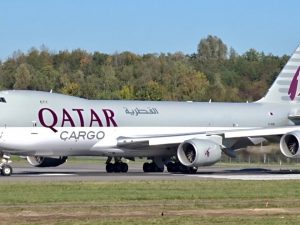 Embarking a ‘1 Million Kilos’ campaign, from July to the end of December, Qatar Airways Cargo will enable charities to use its services to transport humanitarian aid and medical supplies all over the world, free of charge. The airline is donating one million kilograms of freight to selected customers around the world to give to the charities of their choice. This will allow the movement of medical equipment, humanitarian relief and essential products to where they are most needed. “This action was triggered by the Covid-19 crisis. The pandemic is a tragedy for millions of people, and we looked for ways how we, as an airline, could help those in the greatest difficulty. This solution – shipping one million kilos of cargo free of charge – is a firm commitment for QR Cargo. More than just words, we wanted to act and to adopt a comprehensive approach based on actions for the future,” said, Guillaume Halleux, Chief Officer for cargo at Qatar Airways. 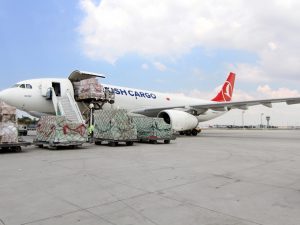 Turkish Cargo has launched a new artificial intelligence chatbot, called CARGY, to provide customers round-the-clock updates about the status of their cargo shipments. The artificial intelligence based chatbot ‘Cargy’ gives information about available dates and flights for shipments. Cargy will offer the opportunity to inquire the rate details at its second phase in September and will provide other details related to the cargo at its third phase which will go live in December. The airline has added that it is enhancing and digitising its technological infrastructure to enhance its service quality. 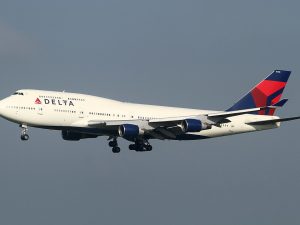 With an aim to offer customers an additional option to pay for their shipments’ destination charges, Delta Cargo has partnered with PayCargo and Unisys. PayCargo’s system has cost benefits directly for Delta Cargo’s customers as it automates data flows, eliminates the need to send paper checks and enables same-day release of cargo. To use the system, customers must first register via the PayCargo website. Customers will then receive updated charges information and efficiently process payments due at the destination. Once payment is made, Delta Cargo is notified in real-time to process the shipment and expedite shipment release. “As we strive to become the airline of choice for our customers, we know that offering secure payment options is one way we can achieve this. We are focused on making it easy to do business with us and our new collaboration with PayCargo and Unisys does just that,” said, Shawn Cole, Vice President, Delta Cargo. 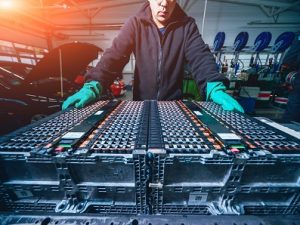 According to expert scenarios forecast, there will be more than 130 million electric vehicles on the roads globally by 2030 . Seeing the strict legal requirements for transporting and warehousing batteries, DB Schenker has launched a new and dedicated service that combines individual national and international regulations concerning battery types and transportation modes. Power and availability of batteries are key to of this transport shift, manufacturers face new challenges managing the logistics around their supply. Jochen Thewes, CEO, DB Schenker, “Batteries are the main drivers of the ongoing electrification of the world. With our global network, we can cover the whole logistics spectrum to create reliable solutions for safe and customised battery transport and storage. We believe that e-mobility will be a key driver towards a more sustainable future. With our new service dedicated to battery logistics, we are proud to be a facilitator of this game-changing development.” 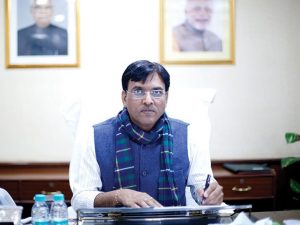 According to Mansukh Lal Mandaviya, Union Minister of State for Shipping, “By developing strategic Chabahar Port in Iran, India will reduce logistics cost by 20 per cent in container transport to CIS countries, bypassing China or Europe.” He explains, “So far, CIS (Commonwealth of Independent States) countries could be reached only via China or Europe. There was no other connectivity with CIS countries. Chabahar port, located in the Sistan-Balochistan province at energy-rich Iran’s southern coast, lies outside the Persian Gulf and is easily accessed from India’s western coast, bypassing Pakistan.” “In a strategic development, loading and unloading of cargo has started at Chabahar Port. CIS countries include Armenia, Azerbaijan, Belarus, Kazakhstan, Kyrgyzstan, Russia, and Uzbekistan. Now, we have developed Chabahar port and there is direct connectivity to these countries via Afghanistan,” the minister said. “Transshipment of cargo started last week at Chabahar Port,” he adds. “Chabahar Port is scaling up its operations drastically. India Ports Global terminal loaded 76 TEUs (twenty foot equivalent unit) all refrigerated for India. This is record single loading and is a milestone in growth path of Chabahar Port,” he said. 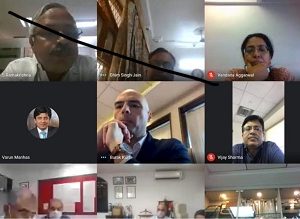 Delhi International Airport (DIAL) in collaboration with Delhi Customs Brokers Association (DCBA) and operators of both the cargo terminals (Celebi and DCSC) has launched paperless e-Gate pass with QR coding at their cargo terminals. The e-Gate pass facility would be open to all stake holders effective July 1 as an optional service and it will be made compulsory from July 15. The e-Gate pass facility for import cargo delivery will not only help in ensuring social distancing by reducing human contact at the terminals, but will also expedite the process and save time. The airlines, consolidators or freight forwarders will now upload the scanned copy of Master Airway Bill/ House Airway Bill in the custodian system. The Bill of Entry (BoE) and Out of Charge (OoC) is being transmitted electronically by the Customs to the custodian system. With these details, the custom broker agent will submit the request for issuance of e-gate pass for the delivery of goods and will generate the QR code at his office itself after due verification by the cargo terminal operator, saving time and resources. 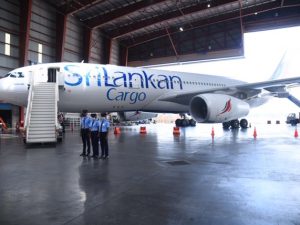 SriLankan Airlines has converted a wide-body passenger aircraft into a dedicated cargo aircraft to support country’s export industries and to keep the country connected with the global economy during the pandemic. The aircraft will fly a total of 170 cubic metres of cargo capacity with the enhanced 60 cubic metres of cargo on its upper deck with 110 cubic metres carried on the lower deck. The total payload of the aircraft will amount 45 metric tonns. The converted A330 aircraft has commenced operations from June 25 to key destinations in the Far East and Europe. Chamara Ranasinghe, Head – Cargo, SriLankan Airlines, said, “With the poor demand for passenger travel and the consequent reduction of air freight capacity in the global market has left a significant void for global supply chains. The past few months have seen SriLankan Airlines operating several routes specifically to cater to this demand for cargo capacity with our fleet of passenger aircraft. The converted operation comes at an ideal time for providing customers with enhanced volume capacity in maximizing the connectivity per flight.” Ashok Pathirage, Chairman, SriLankan Airlines said, “We have transformed this aircraft to allow maximum cargo capacity with main deck loading in addition to the aircraft’s lower deck cargo hold to mainly support the needs of our export industries, as well as our imports sector, during the current global shortage of air cargo capacity and to strengthen the airline’s revenue stream during a time when the air transport industry is in crisis.” The reconfiguration of the aircraft was carried out in-house at the airline’s hub at Bandaranaike International Airport, where the SriLankan Airlines’ engineering team worked around the clock. The new operational configuration … 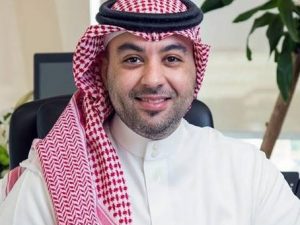 Saudi Arabian Logistics (SAL) has launched the operations of its state-of-the-art pharma facilities recently opened at the King Fahd International Airport’s Cargo Village in Dammam. The new warehouses will support the infrastructure of pharma and medical equipment handling facilities as per the international standards of the World Health Organization (WHO), the European Union Good Distribution Practice and Saudi Food and Drug Authority (SFDA). Before the expansion, the total area of the medical storage facilities stood at 118 square meters but after expansion, it reached 542 square meters with an operational capacity of 14,000 tonnes a year as follows: 262 square meters of the facilities are dedicated for storing goods with temperature ranging between 15-25 celsius whereas 262 square meters are used for storing goods with a temperature between 2-8 celsius. The facilities can also be used for storing different types of medical cargos with very low temperatures, below zero. Omar Hariri, CEO, SAL, says “We usher in a new phase of advanced cargo handling services for pharma and medical equipment. We are creating the proper environment and developing the infrastructure needed for the current period, which has seen an increasing demand for pharma and medical equipment cargos during the Covid-19 pandemic.” 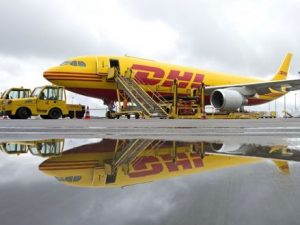 In order to serve scallop producers in the region of Hokkaido, Japan, DHL Global Forwarding (GH) has launched a thrice-weekly charter from Chitose in Japan to Hong Kong. Harvesting for scallops in Hokkaido typically begins in June and ends in October. The charter is the only direct airfreight service from Hokkaido’s main international airport to Hong Kong since airlines halted international flights from the airport as a result of the Covid-19 pandemic. Since authorities had imposed virus-related travel restrictions, exporters from Hokkaido were unable to fly scallops and other perishables to Hong Kong, which is the top importer of Japanese agricultural and marine products and also a gateway to mainland China. According to DHL GF, scallops make up the largest portion of seafood that it ships out of Japan and primarily from Hokkaido. 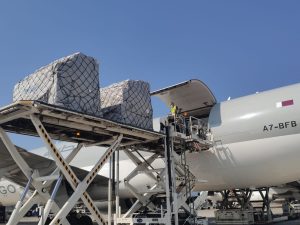 Qatar Airways has signed an agreement with Airlink to transport 200 tonnes of humanitarian aid over the next two years for free of charge. The move was undertaken to help prevent the spread of Covid-19. Guillaume Halleux, Chief Officer – Cargo, Qatar Airways, says, “The Covid-19 pandemic has shown how essential air freight is to responding to crises and we are pleased to support the work of governments and NGOs around the globe, transporting essential supplies to places where they are needed.” Steven J Smith, President & Chief Executive, Airlink, adds, “The 200 tonnes of freight space is a generous donation that will help fragile communities now, amid the Covid-19 pandemic, and in future disasters.