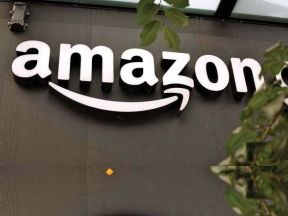 In the last 4 months, Amazon India has fortified plans (announced last year) to expand warehousing operations by 40% and has leased a total of 2.5 million sq.ft. space, spread across Mumbai, Bengaluru and Hyderabad. The US based e-com giant is also currently negotiating with Blackstone Group’s Horizon Industrial Parks to lease another half a million sq.ft. of warehousing space in Delhi and Alipore. Amazon has been signing deals with an aim to augment its warehouses across India, owing to the increasing e-com demand ever since the pandemic struck. Since late 2021, it has sealed 2 major deals with ESR for 6 lakh sq.ft. warehouse space at Bhiwandi and 1 million sq.ft. warehouse space at Shamshabad in South Hyderabad. It signed another major deal with LOGOS, for 1 million sq.ft. warehouse space at Devanahalli Industrial and Logistics Park. Amazon, with this expansion in warehousing capacity, will be spreading its wings over 15 states, supporting 8.5 million sellers throughout the country. 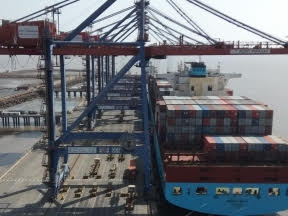 Exports set to boost further with extension of ECLGS 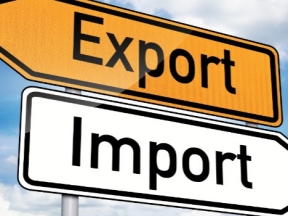 Commenting on the Monetary Policy Statement, keeping the Repo Rate unchanged, Dr A Sakthivel, President, FIEO said that the RBI has struck a nice balance between growth & inflation and evaluating the two, has not tinkered with the rates. At the same time, extension of the Emergency Credit Linked Guarantee Scheme (ECLGS) by the Hon’ble Finance Minister in the Budget 2022-23 will augment further the flow of credit to the exports sector. The President, FIEO said that RBI also acknowledged the challenges of containers and labour shortage and high freight rate, which had led to revision in the trade growth projection for 2022-23 at 6%. He added that the demand side of Indian exports is extremely encouraging and the export sector is all set to repeat its spectacular performance in the next financial year as well despite logistics constraints. Dr Sakthivel hoped that since the countries globally are now opening up, the logistics issues will be taken care of leading to reduction in the cycle of exports. At the same time, we should look into setting up container manufacturing in our own country to add another feather in our “Atma Nirbhar” strategy particularly as coastal manufacturing in the country is also gaining traction. The FIEO chief said that while the current value of Rupee is providing support to exports, we have to be watchful as recent capital outflows in many emerging economies have resulted in deprecation of their currencies significantly making them much more competitive. 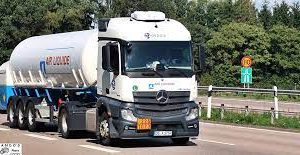 Seven Mercedes-Benz Actros tractor units will be added to GEODIS’ fleet of prime movers in the Asia-Pacific Region (APAC). The leased vehicles are equipped with the latest security and safety technology and will be utilized on the logistics operator’s owned network in Southeast Asia. Supplied by the manufacturer’s Malaysian distributor, Hap Seng Trucks Distribution Sdn Bhd and leased from Euroasia Total Logistics (ETL), the new Actros 5 models will be the first of their type to be sold by Mercedes-Benz in Malaysia. GEODIS has recently expanded its road network in the region with service destinations in Vietnam added to its existing full and partial load service linking Singapore with Malaysia and Thailand. The network will eventually connect with Chinese markets on a day-definite, door-to-door basis delivering a road transport alternative to the more costly air, and slower ocean, options. Lakshmanan Venkateswaran, Sub-Regional Managing Director – South East Asia of GEODIS said, “The rapid expansion of our road mode offerings along the spine of Southeast Asia’s economic backbone has resulted in more than 50% increase in volumes since the service’s inception in late 2019. Linking Singapore to Kuala Lumpur and Bangkok, and now into Vietnam our owned network brings reliable transit-times and cargo security. This new equipment will further enhance these service attributes and aid the fast-growing businesses of our high-tech, retail, ecommerce and FMCG customers.” 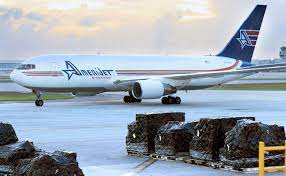 Amerijet International Airlines will implement SmartKargo’s cloud-based cargo management solution to offer improved efficiency and a streamlined user experience for its customers. SmartKargo offers a suite of integrated tools and solutions to support essential cargo functions from customer management, pricing and sales, operations, and warehouse management, to loading and unloading and ramp operations. “SmartKargo will take Amerijet to the next level. Our customers and employees will find it easier to use than any other tool,” said chief executive Tim Strauss. “SmartKargo’s end-to-end platform is accessible from any device, our global network will be delighted with this change.” The partnership with SmartKargo comes at a time when Amerijet is deploying a series of strategic digital investments that aim to transform, automate and improve the service provided to its customers. Amerijet, one of the first dedicated all-cargo airlines in the world to adopt the SmartKargo platform, operates its own dedicated fleet of freighters from its primary hub at the Miami International Airport to destinations throughout the Caribbean, Mexico, Central America, South America and Europe. 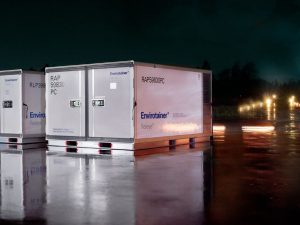 Envirotainer, the global market leader in secure cold chain solutions for air transportation of pharmaceuticals, has launched its latest innovation, the Releye® RAP. This is complemented by the new Control Tower managed service. The Releye® RAP sets a new benchmark for temperature-controlled 5-pallet solutions. The largest of the new generation Releye® containers, the RAP is the only one of its type in the world, combining big capacity with superior features. Designed to meet the strictest requirements in pharmaceutical air freight, the integrated live monitoring enables a unique insight into product condition, location and progress of the shipment. With its increased efficiency and capacity, it reaches outstanding CO2 reductions per shipment, and is the future solution for secure cold chain shipments. All monitored and maintained with the new service Control Tower. The Releye® RAP is the second in a family of advanced temperature-controlled air freight containers Envirotainer is developing. It joins the 3-pallet Releye® RLP launched in 2021. The foundation of the Releye® platform are the five pillars: Control, Monitoring, Autonomy, Value and Sustainability.

Turkish Cargo has moved its freighter operations over to Istanbul Airport to join its passenger flights after more than two years of operating with a dual-hub setup. With the airline’s new cargo hub, named SMARTIST, now fully operational the airline took the decision to transfer freighter operations to the new airport. In total, 4,125 pieces of equipment of 80 different types were transferred to Istanbul Airport as part of the move. The re-location took a total of 72 hours. Turhan Ozen, chief cargo officer at Turkish Airlines, said, “During the last three years, we carried out a substantial operation in both of our hubs. While we made use of our freighters at the Ataturk Airport, we benefited from our passenger aircraft and the pax-freighters capacity at the Istanbul Airport. We performed approximately 30,000 flights, 23,000 of which were performed by making use of our freighters and 6,000 of which were by pax-fighters, and we transported more than 4m air cargo shipments, 2.5m tons of which were transported from/to the Ataturk Airport and 1.8 m tons of which were transported from/to the Istanbul Airport.” The SMARTIST hub will eventually have an annual capacity of 4m tonnes and measure 340,000 sq m. 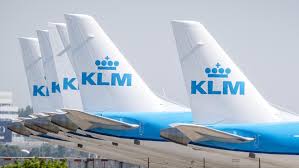 DHL Global Forwarding and Air France KLM Martinair Cargo (AFKLMP) have teamed up on the purchase of 33m litres of sustainable aviation fuel (SAF). The partners said the three-year cooperation represents one of the most “significant SAF purchases in the freight forwarding industry”. DHL has committed to covering at least 30% of its air and ocean fuel requirements with sustainable fuels by 2030. “Since it is nearly impossible both technically and logistically to physically track SAF from production to the airplane, ‘book & claim’ offers a digital accounting system to track and transfer emissions reductions from sustainable fuels across the value chains,” the partners said. Adriaan den Heijer, executive vice president, Air France KLM Cargo and managing director Martinair, said: “The Air France KLM Martinair Cargo teams are strongly committed and feel responsible for creating a sustainable future for our industry. This deal is a great opportunity to accelerate our joint sustainability efforts. Sustainable aviation fuel (SAF) has a lot of potential to reduce CO2 emissions and we are delighted to collaborate with our strong, long-term partner DHL Global Forwarding on this journey to greener logistics and transportation in the coming years.” Tim Scharwath, chief executive, DHL Global Forwarding, Freight, added: “With our Sustainability Roadmap, we have set ourselves ambitious goals on our journey towards zero emissions. Sustainable fuels are a fundamental part of our efforts. That is why we have committed to covering at least 30% of airfreight and oceanfreight fuel requirements with sustainable fuels by 2030. Our partnership with AFKLMP will help us achieve that goal”. 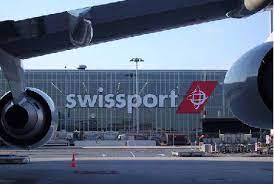 Ground handler Swissport reported a successful business year in 2021, primarily due to its cargo unit. The company processed 5.1m tonnes of cargo at its more than 100 air cargo facilities last year, which is an all-time high and represents a 10% increase compared with pre-pandemic 2019 levels. Meanwhile, the company’s larger airport ground services business is still “severely affected by the global travel restrictions”. Last year passenger numbers stood at 97m compared with 265m in 2019 and flights handled stood at 2m against 4.1m pre-pandemic. Swissport International chief executive and president Warwick Brady said: “I am immensely proud that our teams around the globe – in an extremely challenging environment – have collectively delivered a very respectable result. “It demonstrates the resilience and reliability of our company as an airline partner. We have intensified our customer engagement in recent months and continue to bring in new business and grow existing accounts. For 2022, we expect an accelerated recovery of global air traffic, latest by the start of the summer holidays in the northern hemisphere. This will also boost demand for airport ground services.” 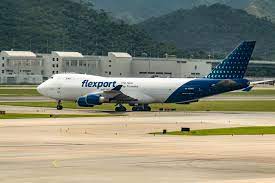 Flexport has added more air cargo charter capacity in response to what it expects to be another robust year for airfreight. The freight forwarder has announced a deal with JetOneX, which currently operates B747Fs, to provide services on the Asia to Europe trade lane. The service will operate twice a week between Hong Kong and Maastricht (MST), and once a week between Ho Chi Minh City and Maastricht. Neel Jones Shah, executive vice president airfreight at Flexport, said: “Disruption in the airfreight market caused by global uncertainty and rapidly changing Covid regulations continue to result in cancellations and volatile pricing for our customer. “By partnering with JetOneX, we’re able to grow our capacity, and our customers will enjoy best-in-class service flying into an uncongested MST airport as a gateway for the rest of Europe. In the future, we plan to build upon this service to create a reliable network of scheduled services that our customers can rely on whenever they need it.”