MoU signed to construct MMLP at Jalna in Maharashtra

National Highways Logistics Management (NHLM) and Jawaharlal Nehru Port Trust (JNPT) have signed a memorandum of understanding (MoU) for the construction of a multimodal logistics park (MMLP) at Jalna in Maharashtra. Nitin Gadkari, Union Transport and Highways minister said, “The construction will serve as a stimulus for the growth of the Marathwada region. The development will serve as the region’s operational dry port linking the Delhi-Mumbai Industrial Corridors with Samruddhi Marg.” The minister also added that Jalna will become the Marathwada region’s automobile hub, and that the infrastructure will encourage export of agricultural products. The state’s current auto hubs are the Pune-Chakan belt which is home to some of the biggest names in the auto sector including Bajaj Auto, Mahindra & Mahindra, and Tata Motors. The Aurangabad belt is another hub with the likes of Varroc Engineering. “The Centre has authorised the development of 35 multimodal logistics parks (MMLPs) as part of the Bharatmala Pariyojana with the aim to centralise freight consolidation and reduce logistics costs from 14 percent of GDP to less than 10 percent at par with international standards, while also connecting all modes of transportation, including roads, rail, water, and air,” said Gadkari. In addition to Jalna, Maharashtra is anticipated to have eight additional multimodal logistics parks in Ratnagiri, Bhiwandi, Akola, Sangli, Jalgaon, Solapur, and Nasik. The land will be made available by the state government. 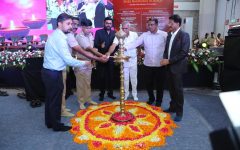